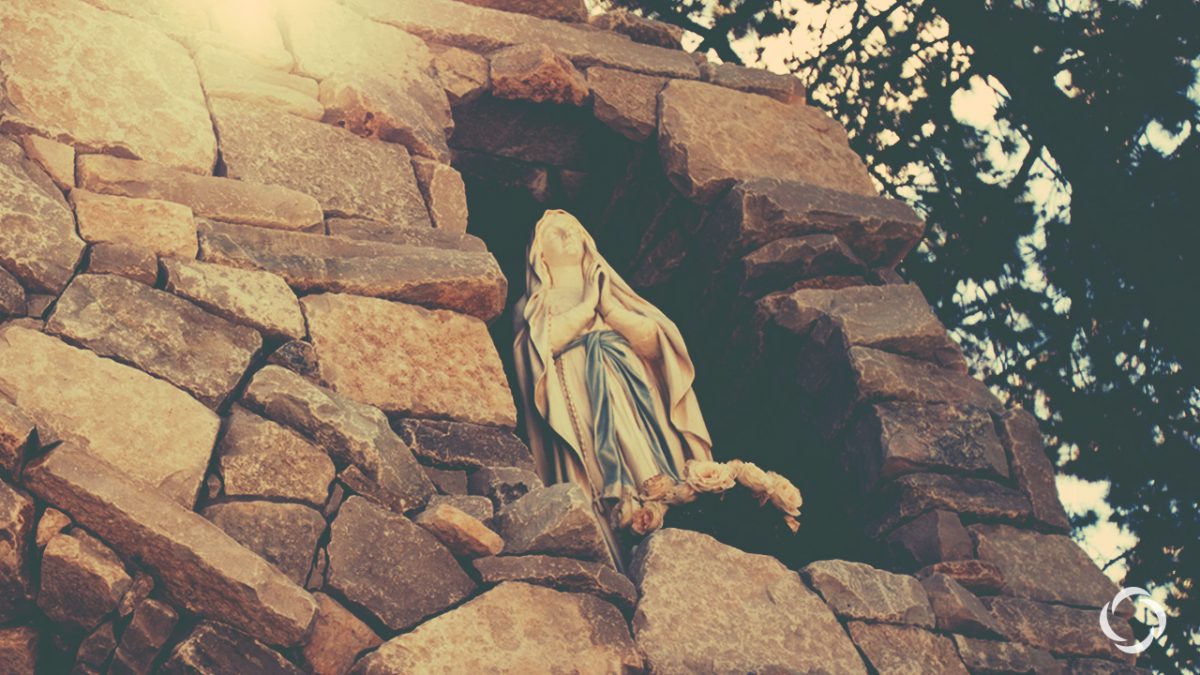 The Immaculate Conception: It’s About Mary.

Why does the Catholic Church… in the middle of Advent, while preparing for Christmas… throw in yet another holy day?

Why pause to honor Mary while we’re prepping to party with Jesus? What is the Immaculate Conception… and why is it a big deal?

God was hoping you would ask.

First, we need to be clear here.

Why would God preserve Mary from Original Sin?

The quick answer: Because God is God, and He can do anything He wants.

The better answer: The Blessed Virgin Mary was conceived without original sin in order to preserve her as the perfect vessel through which our Lord would become flesh to the world. This does not mean, however, that Mary was not in need of a Savior. Jesus redeemed Mary, too, but in a unique way.

You and I are conceived with the stain of original sin (unleashed in Eden by our ancestors Adam and Eve), and we need Baptism to wash away that stain and cleanse our souls.

The difference is that when Mary was conceived, God intervened and chose to prevent Mary’s soul from bearing that stain.

Now, this is where some Christians point to Romans 3:23, which clearly states:

“…all have sinned and fall short of the glory of God, they are justified by his grace as a gift, through the redemption which is in Christ Jesus…”

And as I mentioned earlier, Mary, herself, proclaims God as her “Savior” (Luke 1:47). The Catholic Church absolutely agrees with this fact and teaches (in Lumen Gentium, 53 – 56) exactly how Mary “was redeemed by the merits of her Son” (CCC 492).

One could say that Mary’s redemption was proactive… while Christ’s sacrifice removes our sin, it preserved Mary from it.

I know… this is deep stuff.

Picture it like this: you’re walking down a path in the forest and you fall into a deep, dark pit. That pit represents original sin. Someone reaches in to pull you out… they are now your “savior.” In Mary’s case, before she fell into the pit, God intervened and lifted her over it. He preserved her from the pain (and the stain). This was also a form of saving her — just in a different way.

Even the saints wrestled to get their heads around this truth. St. Augustine, for example, believed it and proclaimed it. St. Thomas Aquinas struggled with it… fearing that it implied that Mary didn’t need a Savior. Over time, however, his continued prayer and humility gave way to a deeper understanding of this truth and its Scriptural roots.

More than a Woman

Remember what the angel said when he greeted Mary in the Gospel of Luke, “Rejoice, O highly favored daughter!” (Luke 1:28). The better, more accurate translation reads, “Rejoice, you who are full of grace!” (from the Greek phrase kecharitomene).

Without getting too deep into Greek here, it’s important to note that the term indicates that Mary was “graced” already (not by the angel’s visit) and that she still was presently. The Greek speaks to her character and quality, not her luck. This was not an announcement that Mary had randomly won some divine lottery. She had been set apart… chosen and preserved… from the beginning of time.

This means that God prepared Mary to be clean (sinless) so that she could give birth to the Son of God. This doesn’t mean that she was never tempted. She was. But the Church says that she was filled with the love of the Holy Spirit and that there was no room for sin to take over. That’s a lot of love.

If you want to read more about this teaching, check out the Catechism of the Catholic Church paragraphs 721 – 726.

Did the Church just make this up?

Because this doctrine of the Immaculate Conception wasn’t officially defined until 1854, some think that means that the Catholic Church just made it up. What people have to remember, however, is that this doesn’t mean it wasn’t believed or taughtprior to that. It was.

You see, the Church is pretty busy defending truth and offering a billion souls the Sacraments. She doesn’t usually stop to “officially define” an understood doctrine unless there is some controversy or need for clarification. Sometimes, too, though, the Church officially declares a long-understood truth because it helps the faithful to grow even more deeply in understanding and devotion (which is the case here). The Pope saw the need for Mary’s intercession even more greatly in the modernizing Church and he wanted to encourage deeper prayer and devotion to her intercession.

Wouldn’t God, in His infinite wisdom, want the body and womb that carried Christ to be a perfect and pure dwelling place?

Why wouldn’t God want to set apart the woman who would give birth to His only Son?

Wouldn’t the same God who rose a star in the sky as a heavenly birth announcement to earth (Matthew 2:2), who emptied Himself and took on flesh (Philippians 2:7) and who conquered death and rose from the dead (Acts 2:24, Romans 6:9) be willing to go above and beyond in this way, too?

Wouldn’t God want Mary to be a stainless vessel and a model of perfect discipleship to carry and raise His only Son, Jesus?

The original article by Mark Hart can be found on the Life Teen website.